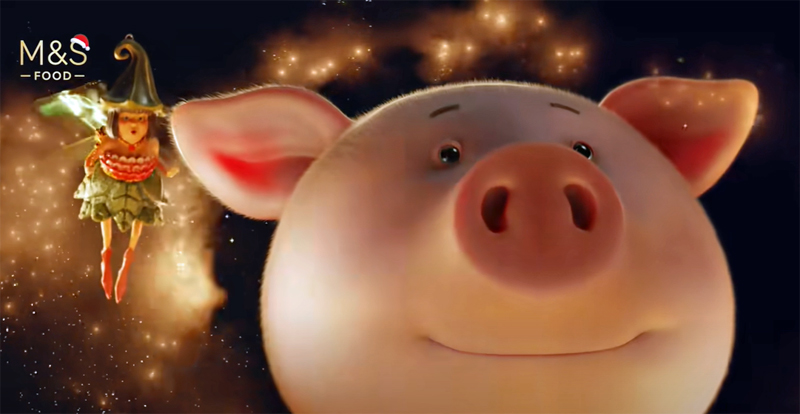 In contrast to last year’s pared down celebrations the Christmas advert 2021 season has kicked off with everything from alien visitations to Sainsbury’s on the nose “Christmas to Savour” ad featuring Etta James’ divine track At Last.

Sainsbury’s worked with agency Wieden+Kennedy to create an advert which sees a large gathering of family and friends for Christmas dinner with grandpa having trouble cracking a nut, kids hiding under the table with some goodies and a dog jumping up and down begging for food.

John Lewis has an unexpected guest as Nathan bumps into alien Skye and helps her learn about Earth’s festive traditions including Christmas jumpers, mince pies and tree decorations. 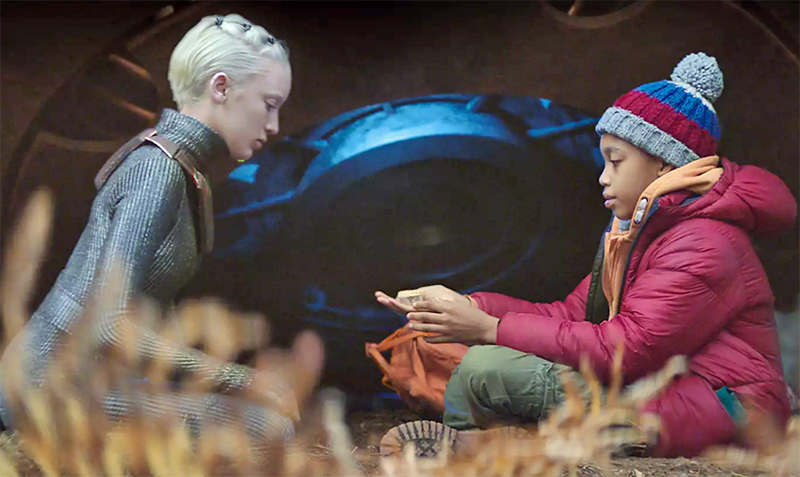 The visuals are accompanied by a slowed down version of Giorgio Moroder/Phil Oakey’s Together in Electric Dreams sung by Lola Young, an up-and-coming 20-year-old singer-songwriter from South London and stars 14-year-old actors Raffiella Chapman and Jordan Nash. The advert was directed by award-winner Mark Molloy and created by agency adam&eveDDB.

Of course, it didn’t take Iceland long to put out a spoof version replacing alien Skye with a giant Space Raider. The frozen food retailer offered its “apologies to John Lewis” before playing the ad on its official Twitter feed. 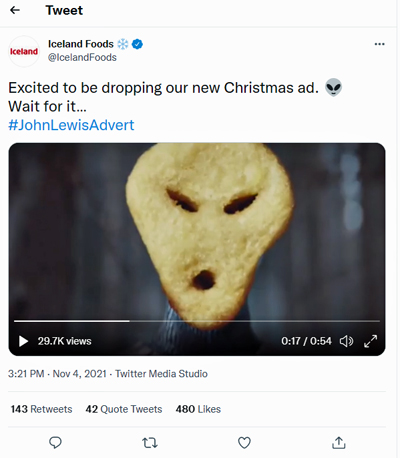 John Lewis replied with “Thanks for dropping the most #UnexpectedCollab of 2021” and a spokesperson later added: “We’re very flattered that Iceland clearly think our ad is out of this world.”

No Colin the Caterpillar but instead M&S Food unveiled its other animal star name Percy Pig who will be celebrating 30 years on the shelves next year.

Voiced by Spiderman’s Tom Holland (with his native British accent no less), alongside an animated Dawn French as the Christmas Fairy, a drop of her magic wand brings Percy to life and the two of them go off exploring the after hours M&S Christmas Food Hall and discover some of the foodie delights available this year.

M&S has also confirmed that there will be a further seven adverts showing Percy exploring different food products with new visuals being released from now until New Year.

And yes Percy, the Triple Chocolate Panettone would make our curly tails wag too if we had one!

For Aldi’s Christmas advert 2021 Kevin the Carrot is joined by footballer Marcus Rashford in a Dickensian-style animated tale of the Christmas hating Ebanana Scrooge. 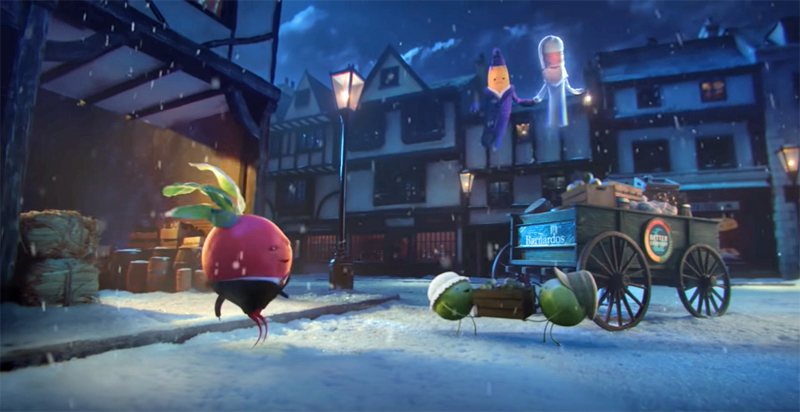 Ebanana receives a visit from Kevin as the Spirit of Christmas, who takes him on a magical journey and helps him mend his miserly ways.

As well as Kevin, there are a host of fruit and vegetable characters throughout the ad, including Marcus ‘Radishford’, plus Tiny Tom, Peas, and Goodwill and the message the viewer is left with at the end is a positively uplifting one – “For you to be happy, you need to be kind.”

To celebrate the new advert, Aldi has announced it will be providing 1.8 million meals to families in need over the festive period. Working together with Neighbourly, the supermarket will be donating its surplus food to local causes.

O2’s Bubl is back – with friends

O2 and agency partner VCCP London have an inspiring message about connectivity. With a voiceover from Sean Bean, the telecoms giant sends out thousands of its Bubl robots to give data to people who don’t have a connection. 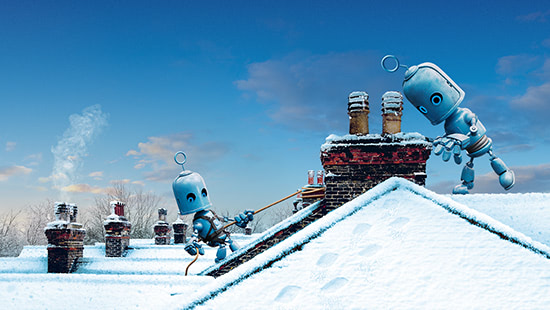 The company has also launched the UK’s first ever National Databank, in partnership with digital inclusion charity the Good Things Foundation. Back in July 7.5 million GB of O2 mobile data was donated to help more than 200,000 people get connected by the end of 2023.

This Christmas O2 is donating even more. For every plan bought from the company between November 1 and January 31 it will donate 10GB data to the National Databank to help tackle data poverty.

Disney’s offering is a beautiful reminder of family

The home of the mouse’s festive advert, The Stepdad, is all about family togetherness and is a sequel to last year’s Lola, which celebrated festive traditions being passed through the generations.

It follows Nicole, the granddaughter from the 2020 ad, who is now all grown up with a family to make Christmas traditions with. It follows her and her two adorable children, Max and Ella, as their new stepdad Mike moves into their family home.

Disney goes for the tissues with a heartfelt film about family

Set to an emotive Love Runs Deeper, sung by double Grammy Award winner Gregory Porter, for every download of the track made before December 31, 2021, 100% of the proceeds will be going to Make-A-Wish® international, the charity foundation which grants life-changing wishes for children with critical or life-threatening illnesses around the world.

Amazon’s Christmas advert 2021 is all about kindness

Featuring Adele’s new single Hold On, retail giant Amazon’s festive message is about kindness. The heartfelt story looks at the anxiety many young people have been dealing with after 18 months of the pandemic and how a single act of kindness between neighbours can be all it takes. 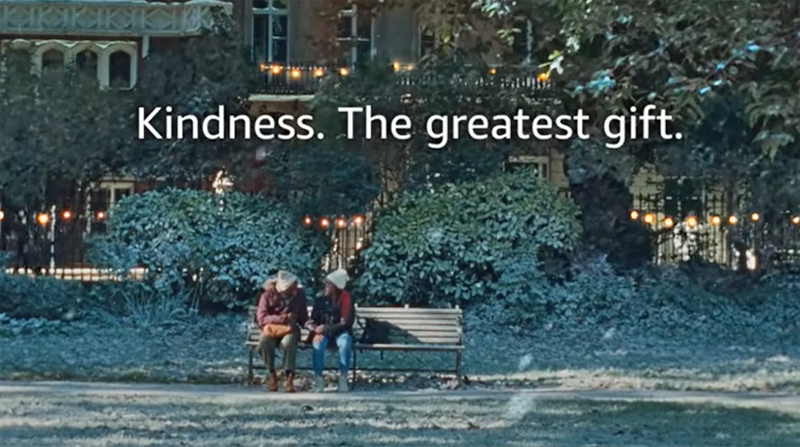 It’s a powerful reminder of the isolation many have felt throughout the lockdown and it reinforces the idea that Christmas doesn’t have to be about spending lots of money. In this instance, a simple bird feeder to hang outside on a flat’s balcony is all it takes for two people to find a connection.

And finally, but by no means least, is Coca-Cola

Working with agency DentsuMB UK, Coca-Cola continues its ongoing “Real Magic” global brand campaign with a holiday ad that drives home the concept of togetherness, a revival of the Coca-Cola Holiday Caravan – which was canceled last year due to the pandemic – and new virtual Santa sightings.

Chimney shows a young boy newly moving into an apartment without a fireplace. He has a brainwave and mobilises a group of his neighbours to fashion a makeshift chimney out of cardboard boxes with which to welcome Santa.

Of course the final box at the top of the long, higgledy piggledy stack is a red Coca-Cola one. The classic Chim Chim Che-ree provides a musical background to this tear-jerker as the young boy’s lonely neighbour discovers the “Real Magic” of the holiday does not come from presents and gifts, it comes from shared special moments together.

And we’ll finish off with a bonus best of the rest Christmas advert 2021 offerings from the UK and Europe’s biggest brands. 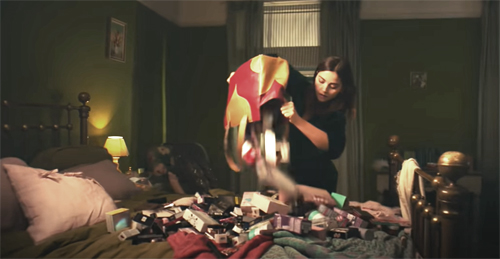 Directed by Academy Award winner Tom Hooper, the three-minute advert follows Joy as she spends time with loved ones and uses her magical bottomless bag to distribute gifts – suitable for every situation – to friends and family.

Tesco has come under fire from some quarters for its advert which almost sees Santa stalled on his Christmas Eve journey – until he reveals he’s been “double jabbed” and has his Covid passport.

The advert, created by agency BBH, is set to a soundtrack of Queen’s Don’t Stop Me Now and focuses on the British “stiff upper lip” as people find ways around a number of potential problems from the lights going out to picnicking on the side of the road after a vehicle breakdown.

Waitrose makes it all about the food

Extras actor Ashley Jensen voices all those hidden thoughts and naughty tricks by palming off Heston Blumenthal’s mince pies as her own and eating all the stuffing while Carol of the Bells plays in the background and the Gold Vocal Collective sings “We Wish You A Merry Christmas”. 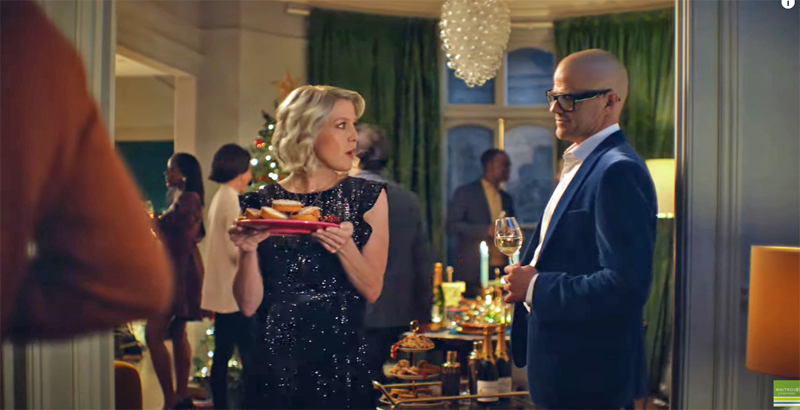 Banking Group Erste has a heart-warming animated advert that reminds us to be more mindful of our ecological impact on the Earth.

Featuring work from Passion Animation Studios, post production from Coffee & TV and music from Soviet Science, it was the brainchild of the Jung von Matt Donau agency. 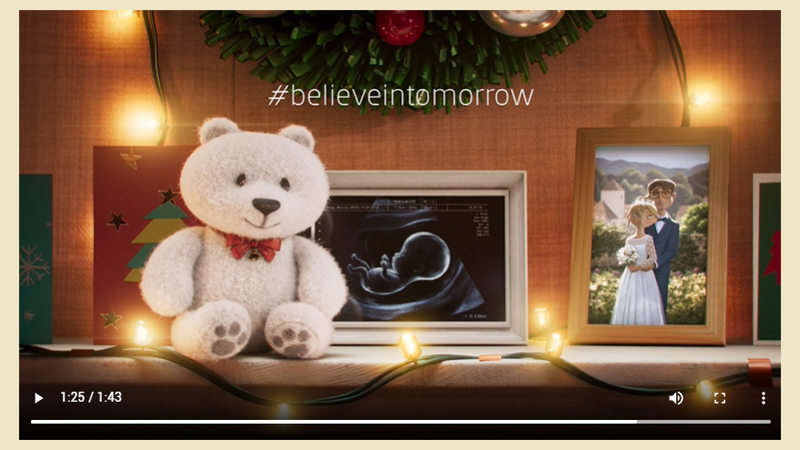 British supermarket and home retailer Asda is “On Ice” for its Christmas 2021 festive campaign with an advert that sees everyone on ice skates and showcases the food and drink available to “Make Christmas Spectacular” all performed beautifully to a backing track of Ravel’s Bolero (you know, the Torvill & Dean one).

Very was the first Christmas advert

Perhaps taking its “Getting Started Early” theme to the extreme, online retailer Very was the first to launch its Christmas advert 2021 – in October!

The first advert to drop sees a choir singing a reworded version of Holly Jolly Christmas as Halloween Trick or Treaters receive mince pies while visiting a house covered in Christmas decorations.

Its second advert carried on the “very best excuses” message in the song with a whole host of guilty pleasures including dressing a baby in a Santa costume, drinking gin in your PJs while binge-watching period dramas, and buying a console to keep your nine-month-old baby quiet.

Which one’s your favourite? Hit us up on social media and let us know if we’ve missed your best Christmas advert 2021 out!

Take a look at our 5 Awesome And Easy Ideas To Help Your Christmas Marketing blog for some top tips on running a seasonal campaign.