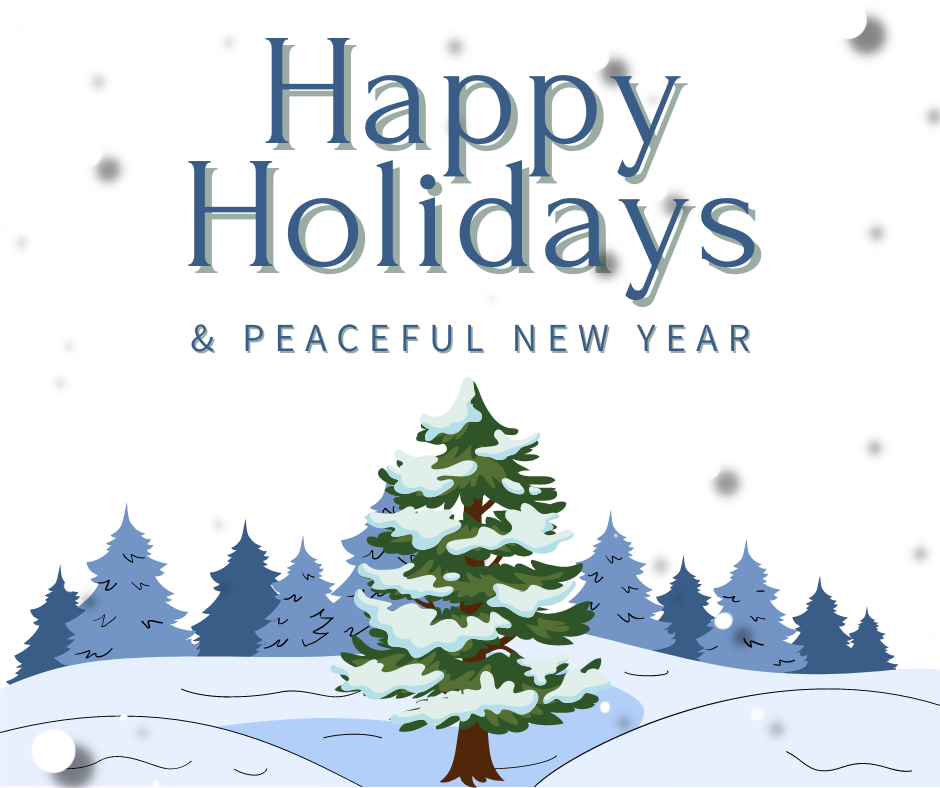 After a tumultuous year online retailer Very was first off the mark once again with its 2022 Christmas advert.

The advert dropped on October 13th and features a mother looking at the camera and stating that: “Christmas isn’t just one day, it’s lots of days” as her family exchange gifts.

Directed by Jocelyn DeBoer and Dawn Luebbe via Biscuit, the campaign aims to showcase the multi-category offering available across Very.

But with research showing the number of people feeling negative about Christmas is almost five times higher than at the same time last year, experts have been predicting brands will be careful not to appear out of touch with over-the-top adverts.

So far this appears to be the case. A number of the big name brands and retailers have opted for a more muted approach to their campaigns this year.

It’s also important to remember that many of the 2022 Christmas advert campaigns will have been planned and made months in advance, and many may have chosen to take a more toned down approach if they had been planned in the current climate.

Around 70% of Britons are cutting back their spending compared to last year and 75% say they aren’t planning a “big celebration”, according to a recent survey by Accenture.

Retail expert Catherine Shuttleworth, of Leeds-based Savvy Marketing, said: “Retailers have to strike a balance between recognising that consumers are facing financially challenging times, but also acknowledging that people still want to have a brilliant Christmas, particularly after the past couple of years during the pandemic.

“People don’t necessarily want the current tight times to be reflected back at them,” she said. “Christmas is also about having fun.” she added.

Tesco and Lidl have both put an emphasis on price and affordability in their messaging, at a time when many families are facing rising grocery bills. 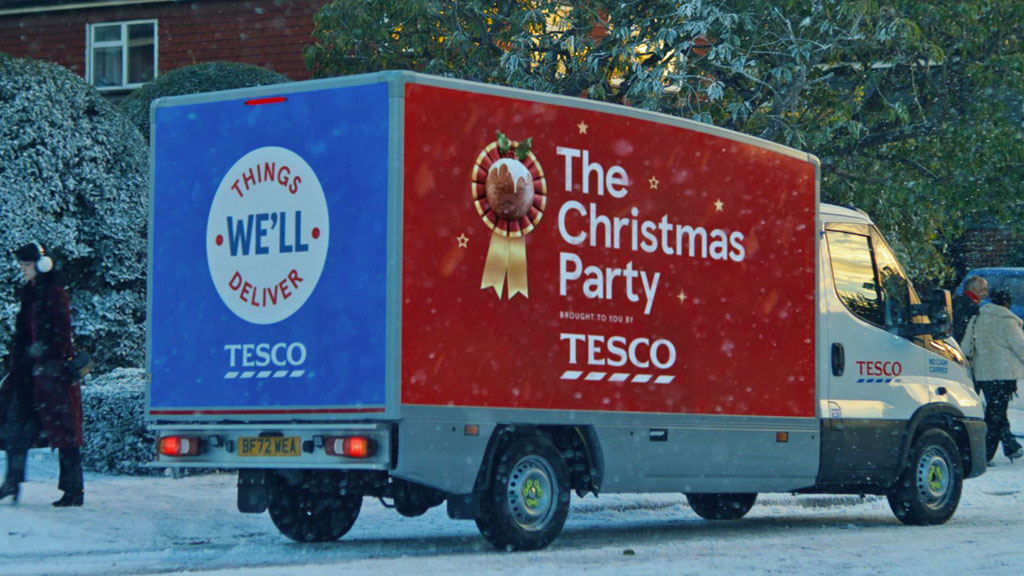 Tesco’s Christmas party advert promises to deliver an affordable and joyful festive season. “The only thing we’ll cut are prices,” it says.  Featuring a broadcast by The Christmas Party, the ad points out many who are struggling with their finances but getting festive nevertheless.

Set to the soundtrack of Europe’s The Final Countdown, the ad also addresses some important Christmas questions, such as whether Love Actually is the best Christmas film.

Lidl’s 2022 Christmas advert tells the story of Lidl Bear, who gets his very own version of the infamous Lidl jumper when his owner’s dad shrinks it in the wash. Unexpected fame goes to bear’s head and it takes a reminder of what’s really important to bring them home. 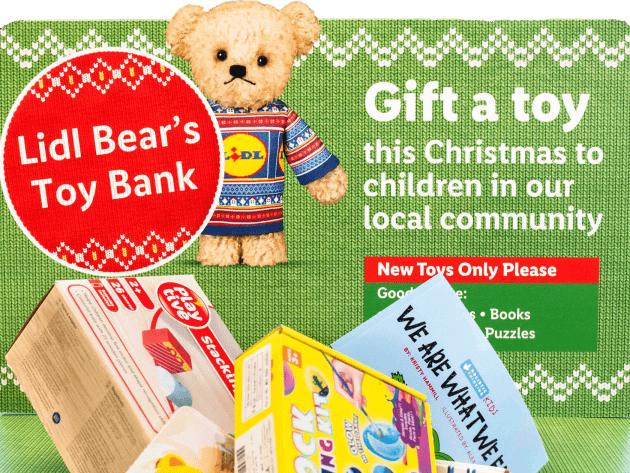 The supermarket brand continues to promise its well-known phrase to customers this Christmas season: “Big on quality, Lidl on price.”

Other companies are also exercising restraint

John Lewis said its advert, featuring a foster family, was less about buying things and more about kindness. It told the BBC the cost-of-living crisis was “front of mind” when deciding what tone the advert should take.

The company is also putting its money where its advert is, working with Action for Children and Who Cares Scotland through its Building Happier Futures fund.

You can even buy a skateboard and 25% of the sale will go to the project.

John Lewis focuses on an act of kindness

Titled The Beginner, the advert is centred around two foster parents who are about to take in a child.

From the opening scene, accompanied by a soundtrack of Blink 182’s hit song All the Small Things reimagined by Mike Geier, we follow a middle-aged man as he struggles to master the skill of skateboarding.

After many failed attempts and mishaps, viewers are left questioning the motive behind his determination to learn how to skateboard until the final scene, when there is a knock at the door…

Christmas Fairy is back for M&S Food Hall

There’s little sign of the recession in Marks & Spencer’s Food Hall 2022 Christmas advert however, as Dawn French’s Christmas Fairy ornament returns after the lights go off in a quiet family home.

This time she’s endeavouring to find a friend amidst the tree decorations and stumbles across Duckie, a tatty dog chew toy, voiced by French’s comedy partner Jennifer Saunders.

After a brief escape from the family dog, Fairy creates a fully ladened table full of food and drink with which to tempt her new friend.

M&S has a second 2022 Christmas advert, for its clothing and beauty gifts, which is set against the vocals of Harry Styles’ Treat People With Kindness.

The ad was directed by filmmaker Michael Gracey, best known for directing The Greatest Showman, and takes place on Christmas Day on a quiet cul-de-sac. It features a series of thoughtful gifting moments, but inside each home as an M&S gift is opened, something unexpected occurs.

When the advert pans outside, the cul-de-sac has been taken over by a joyously eclectic range of real-life community groups who will benefit from M&S donations this year. 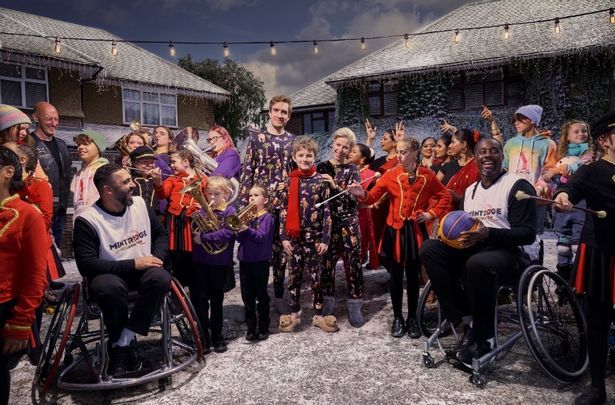 It has made a one-off donation of £1m – through the Neighbourly Foundation – to 1,000 different community groups across the UK this Christmas as they struggle to find funds during the cost-of-living crisis.

Kevin the Carrot’s back for Aldi

Paying homage to the iconic 1998 Nike World Cup Advert, including Elvis’ classic A Little Less Conversation as the background track, the teaser features everyone’s favourite family of carrots, as Kevin is joined by his wife Katie and kids Baby, Chantenay and Jasper in an airport.

As Kevin kicks away his newspaper, it’s picked up by Ronaldi (a lemon) who passes the ball to blueberry ‘Messy’, and then from MmmBap (a pack of bread rolls) to Roy Bean, as Kevin tries to keep up.

Macarooney, Beth Swede, and Marrowdonna also star and we can’t wait to see whether Kevin is able to catch up with his family in Paris having missed his flight.

Aldi is another of the big brands supporting Neighbourly through the donation of Christmas meals, as it has done since 2019.

Not normally on the list when you think of festive adverts, the retailer has unveiled three 20-second adverts featuring some of sports biggest names with another footie focus.

In Eau de Footie Mason Mount and Eric Cantona get up close and personal with a new fragrance, while turkey’s off the menu in Family Dinner as Cantona invites Thierry Henry, Emma Hayes, Gabriel Jesus and Clive Tyldesley to his dinner table and Directa has Cantona taking over a “smart home hub” alongside West Ham’s Declan Rice and Jarred Brown.

To mark the festive period Asda and its creative agency, Havas London, have recruited a very enthusiastic team member. 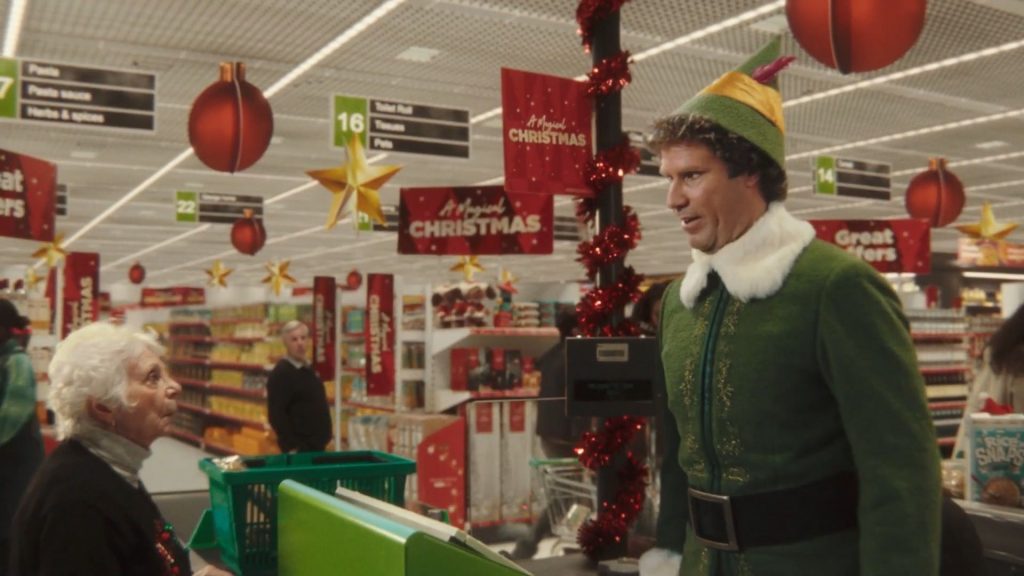 This cleverly spliced advert sees Buddy spreading his own unique brand of festive cheer among staff and shoppers alike.

Sainsbury’s goes for an instrumental version of Wheatus’ Teenage Dirtbag as soundtrack to its fairytale advert highlighting some of its new Taste the Difference range.

Stephen Fry narrates the tale of a young pastry chef trying to impress Alison Hammond’s Countess with a caramelised biscuit version of the traditional Christmas Pudding.

The heart-warming Christmas film uses the original Peggy Fortnum illustration style which has only ever been animated by the South Shields-based company. Paddington stars in a festive and fun-filled tale brimming with British charm and awash with good intentions as he discovers a unique “one-of-a-kind re-loved jacket” for Mr Curry. 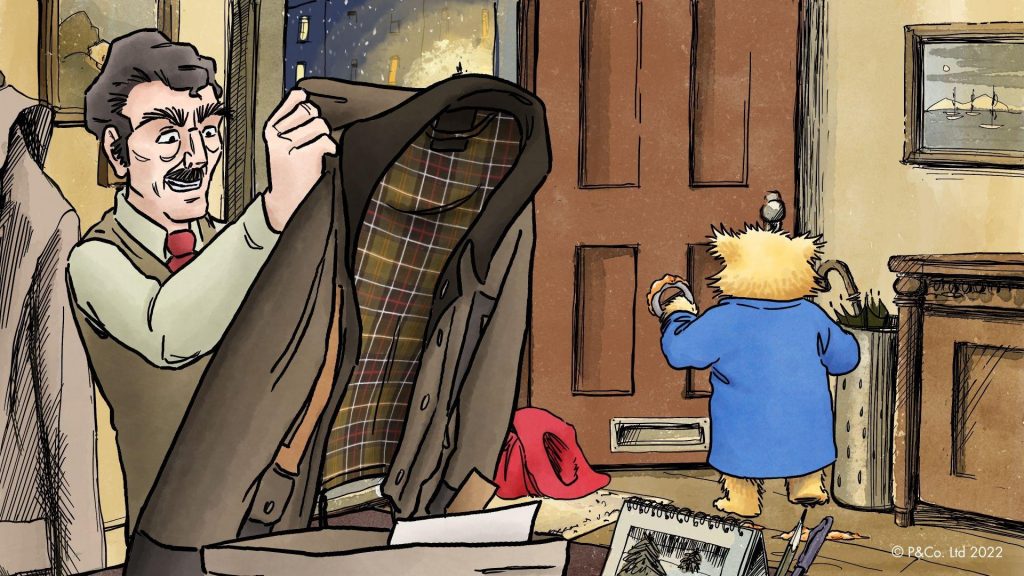 The film focuses on Barbour’s Re-Loved initiative, which enables customers who no longer have a use for their Barbour wax jacket to hand it back in return for a voucher.

Boots brings Joy For all 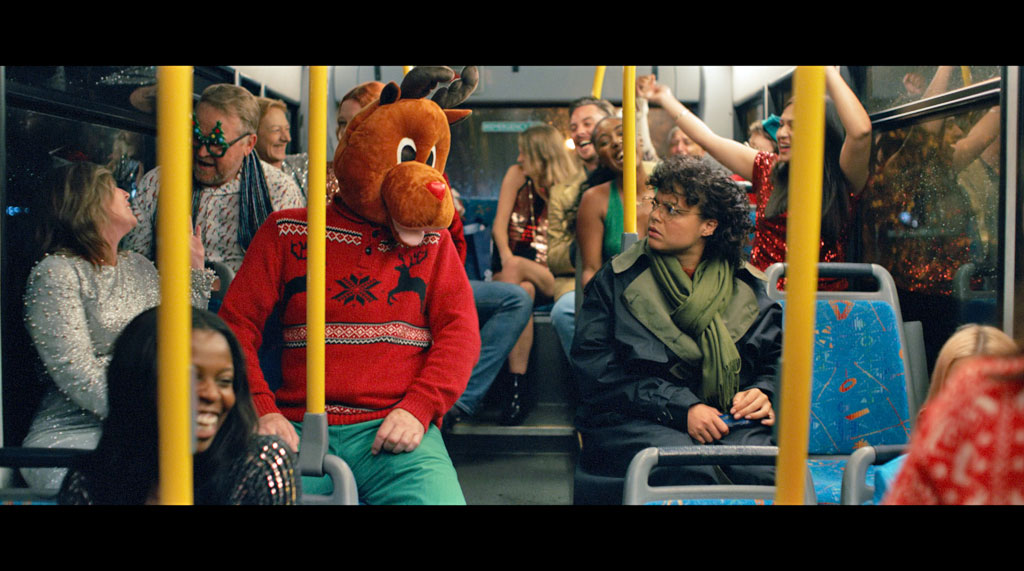 When she puts them on, she is able to see what brings everyone joy at Christmas – whether it’s her co-worker who loves a pamper in the bath, or her brother who dreams of being a glam drag queen, this insight allows Holly to purchase the most perfect gifts for her loved ones.

Make sure you watch to the end to find out who owns the glasses!

Disney signs off on its Make-A-Wish series

And by no means least, Disney has released the final instalment of its From Our Family To Yours Christmas ad trilogy in support of Make-A-Wish.

The 2020 and 2021 adverts together have reached more than 184 million views worldwide combined and it looks like the final chapter will be adding to those numbers with 5.1M views so far since it went live on November 2nd.

Since the launch of From Our Family To Yours, Disney has committed support worth more than $4m to its long-standing charity partner, Make-A-Wish® International and its network of Affiliates around the world, as part of the brand’s ongoing commitment to inspire a better world through the power of storytelling.

When her new sibling arrives, Ella bestows her with a glow-in-the-dark Mickey Mouse soft toy that was gifted to her by her older brother at the start of the short.

As the short unfolds, the song A Little More, written by Parkwild, Sofia Quinn and Rose Tan, and performed by Jessica Darrow, (the voice of Luisa Madrigal in Disney’s Oscar-winning 2021 film Encanto), plays in the background.

The three-minute animated short celebrates the comfort that storytelling brings families during times of change and how it deepens their bonds through togetherness.

Sarah Fox, VP Marketing & Comms, Disney Consumer Products, EMEA, said: “For the last three years millions have watched our characters in our ‘From Our Family To Yours’ animated series, as they spend time together building connections and making memories.

“We set out to create a family unit that would resonate with audiences world-wide. We are truly grateful for the support we have received for this festive campaign and hope that families and fans enjoy this fitting, heart-warming final instalment of the trilogy.”

So that’s our round-up of Beacon’s favourite 2022 Christmas advert entries. Do you agree with us? What would you add that we might have missed? Hit us up in the comments.