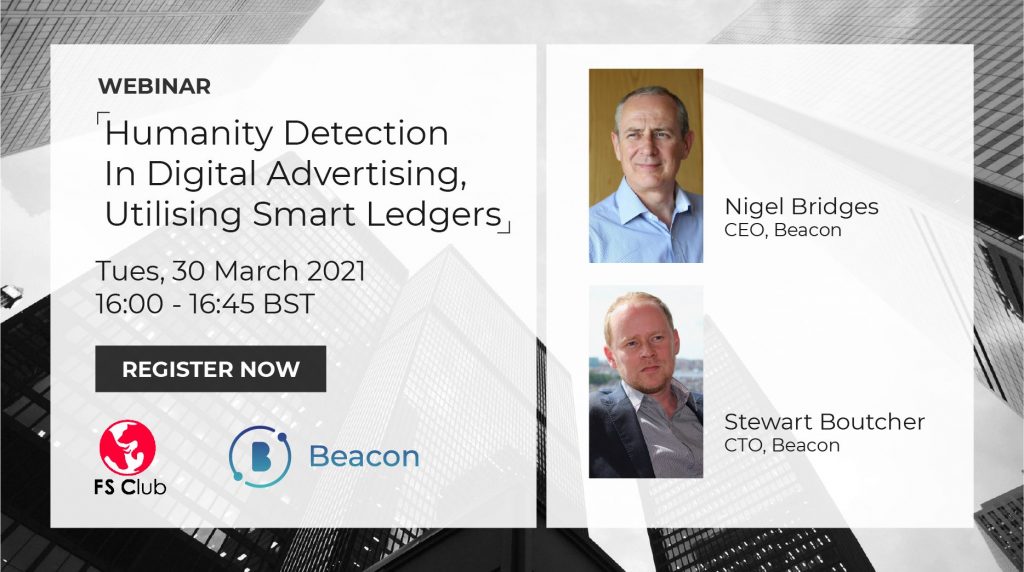 Two of Beacon’s co-founders have been announced as guest speakers at an upcoming free virtual event hosted by London’s leading commercial think-tank Z/Yen.

The event, which takes place at 4pm, is being hosted virtually via GoToWebinar and will be led by Z/Yen executive chairman Professor Michael Mainelli. It will cover key topics including:

It was for this work and Beacon’s Veracity project with Innovate UK – the UK’s innovation agency – that the firm recently won the Tech Nation Rising Stars 3.0 Cyber Award, which recognises the country’s best cyber security companies.

Speaking ahead of the virtual event, Nigel Bridges said: “In 2020, global advertising spend was expected to reach £228 billion, generating an estimated £1.84 trillion in sales revenue.

“However, digital marketing campaigns are subject to average losses of 30% because of fraud and missing clicks – and, in some extreme cases, enterprises have reported that 50% or more of their clicks come from bots.

“Such activity, often referred to as ‘click-fraud’, means many companies are losing significant amounts of their marketing spend to non-human traffic – often completely unknowingly.

“It is important, therefore, for business leaders to understand the extent of the danger that ad fraud poses to their online campaigns, and how platforms such as Beacon can help them turn the tide on bot clicks.”

Professor Michael Mainelli added: “Online advertising is growing at 15% to 20% per annum and is already approximately half of total global advertising. The technology to crush ad fraud exists. Surely the time has come to crush fraud as online advertising enters full adulthood?”

Further information on the event, including how to book your space, is available here.

At Beacon we believe that ‘proof of humanity’ in the transaction is a more certain and consistent approach, rather than engaging in a never-ending war of ‘bot-detection’ attrition with the criminal actors and bots often one step ahead.

In this webinar we will examine the economic, technical, and societal impacts of digital advertising fraud, and discuss the scope for humanity detection in other industries and market sectors.